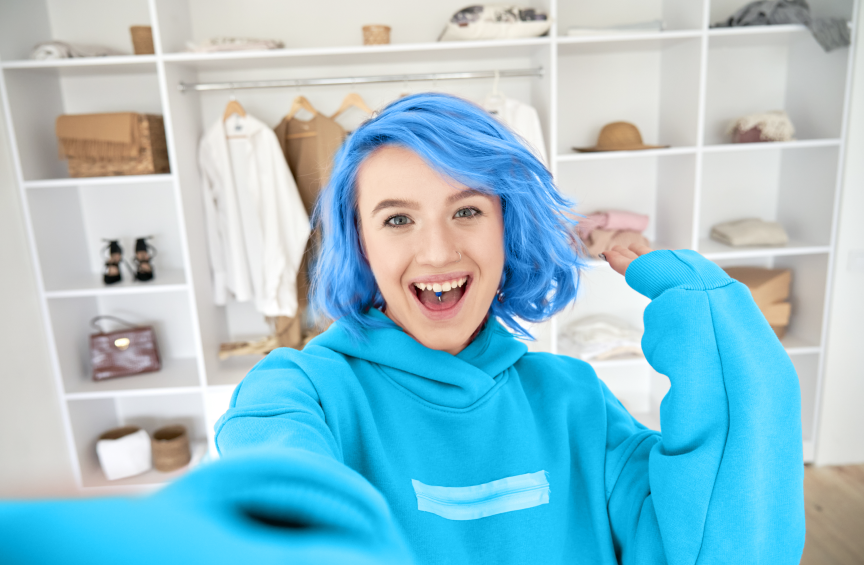 Influencers are the celebrities of our time. Their followers and admirers appreciate the multifaceted input of social media opinion makers, brands use their appeal as an advertising vehicle in targeted influencer marketing. Here, everything or much of the action initially takes place on the social networks - but clever influencers eventually go beyond this and maintain their own domains.

People who rely heavily on social media like Instagram to promote their business run the risk of losing their entire business from one day to the next. That's what happened to influencer Bree Kotomah, among many others. It was only in the second attempt that she secured her existence with a website: boresakotomah.com. We at Sedo have investigated which domain strategy influencers who already have a high level of awareness follow.

Influencers are a phenomenon of the new millennium - made possible by the omnipresence of social networks, which address the needs of different target groups with their varied media content. And this is where most later influencers systematically start to expand their network, if only because of the fast and large reach that can be achieved by liking and sharing on Twitter, Instagram or Facebook.

Leading influencers devote themselves to topics that naturally attract interest. In addition to fashion, sports and cooking, the gaming scene is also a popular segment. Of course, for influencers above a certain size, it's also about generating income with their regular activities on social media platform. Those who make the breakthrough can make a good living from it.

For those who wanting to pursue becoming an influencer, it can be smart to check first whether the social media channels and domains are still available under their desired names.

Here’s three of the most successful influencers and their domains:

This Oklahoma-born makeup expert started out as a blogger but has now graduated to be the world’s most influential beauty expert. @hudabeauty, her Instagram page, has nearly 50 million followers with her successful practices being her tutorials on makeup applications, establishing makeup trends, sharing reviews, and creating how-tos. Huda started a makeup line on her own company’s domain: Hudabeauty.com, and her page is filled with videos showcasing people applying their makeup, product plugs, occasional fashion advice, and more. It was a smart move by this influencer to secure and utilize a domain name similar to her instagram handle. However, celebrities should always secure their names as domain names, too so Huda should make sure to also include hudakattan.com in her domain portfolio.

Ryan’s world features toy reviews and kid-friendly content and attracts its users with a different kind of clout: adorableness.
Ryan is consistently is among YouTube’s top earner, bringing in multi-million dollar pay checks from his Youtube channel reviewing toys. He began in 2015, growing his viewership at impressive rates and has since branched out with a line of toys sold in Walmart and Target. His most popular video has over 1.6 billion views. And he can now also be found on his own website at https://ryans.world/.

A domain of his own is maintained by record-breaking YouTuber PewDiePie, who became famous for his reviews from the gaming scene. He became the first YouTube channel to reach more than 80,000,000 subscribers in January 2019. The Swede whose real name is Felix Arvid Ulf Kjellberg, is as clever in his marketing as he is in gaming. At pewdiepie.store, he sells a small figurine of himself; at pewdiepiemerch.net, he sells classic brands like Vans alongside his own collection. As witty as he is, he immediately secured the matching domain pewdiepie.com, which redirects to his channel. But low and behold: pewdiepie.se was purchased in recent years after he let this domain registration expire by someone who turned it into a fan page. Lucky for PewDiePie that a competitor or internet troll didn’t take this domain hostage and cause damage to his reputation

As the successful examples we’ve mentioned show, many influencers eventually outgrow social media. Those who want to specifically manage their influence as brand ambassadors or even create their own brand need their own domain sooner rather than later.

There are several good reasons for this - including securing your own name before others do. Because even influencers are not safe from domain piracy: these are websites that are registered completely legally using a famous name and thus capitalize on the popularity and painstakingly built-up reach of the influencer for their own advertising and profit-seeking purposes.

But we adamantly caution against going the route this influencer took to get his desired domain. No amount of success is worth going to extreme lengths or acts of violence to secure a domain name and this past influencer is now paying for it severely.

Secure an influencer domain in your own name

For influencers, a domain means more security. Some influencers eventually make the conscious decision to do less on social media and more on their own web presence. Having your own web presence signals a reliable address which after just a few months and, with some clever online marketing, a top ranking in the major search engines. And of course, communication via an e-mail address associated with one's own brand is preferable to the common address endings of free mail services.
With subdomains and the registration of the most important top-level domains, you as an influencer also prevent possible identity theft and the potential harm to your reputation. Secure your online presence in a timely fashion.

With the help of Sedo's services you can:

- Secure your desired domain as an influencer
- Effectively showcase and communicate about your brand, products or services
- Optimize communication with your target groups

Use our domain search to find the best Internet presence - and if you find that your desired domain is already taken, we can help you there, too. Sedo's domain brokers can advise you on securing the suitable domain of your choice and provide you with the necessary support when it comes to purchasing and transferring domains you are interested in.

Take advantage of Sedo's expertise and set your brand up for many successful years with your own domain thanks to our expertise and know-how.